We had been invited to a ‘dedication service’ for a new baby in South London, and I had managed to get a rare Sunday off, so we got up early and drove off from Coventry. As a liturgist I can’t help but evaluate acts of worship: I try just to concentrate on God and just worship, in spite of how I’m being led from the front, but I just can’t do it. I have to say this particular one was a disaster! I sat there feeling more and more miserable at the bad theology, dreadful music and inept leadership. Above all I felt cheated out of a Sunday off, a chance to be led in worship rather than being up front myself.

As we were driving home that evening through central London, we talked about how sad we felt, and how we wished we could go to a good church. That was when we had the idea of going to the evening service at Holy Trinity Brompton in Kensington.  We diverted from our homeward route, and arrived in plenty of time in the Brompton Road. It wasn’t easy to find somewhere to park: there seemed to be a lot more cars around that I’d experienced there before, but eventually we tucked in and walked to the church, only to find huge queues waiting to get in. I knew it was a famous church, but this was just silly!

Finally we got some seats on the balcony, and the service began. The vicar greeted us, and told us that ‘We are living in times of an extraordinary outpouring of God’s Spirit!’ Oh dear. More charismatic hype. 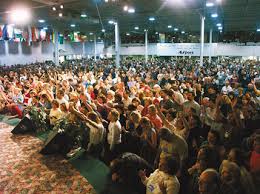 He then went on to tell us about the visit of a member of his team to a Vineyard Church near Toronto Airport. Apparently they were experiencing some incredible manifestations of the Holy Spirit. She had come back and spoken at a staff meeting about what had been going on, at which point the Spirit began to do exactly the same things to the assembled company. That had been ten days ago, and so significant was this move of the Spirit felt to be that it had taken over the agenda of the church. The rest is history, and whatever you think of the so-called ‘Toronto Blessing’ we were there, completely by ‘chance’ from right at the start of it.

One of the features of churches touched by this move seemed to be continual meetings, and so my church in Coventry put on a fortnight of evening sessions, where, in true Vineyard style, we would worship (by which we meant singing songs), hear some biblical teaching, and then invite the Spirit to come and do what he wanted to do. I remember these times as times of great blessing, but above all of tremendous fun. And I remember particularly our children and teenagers being involved up to the hilt, playing or singing in the worship band, ministering and being ministered to. Virtually all of the youngsters who were involved with us at that stage have stayed faithful to God, and I can’t help but believe that seeing God in action so powerfully is a major factor in avoiding the drop-off of teenagers from the church which has become almost expected in many circles.

Much evaluation of the so-called ‘Toronto Blessing’ has flowed under the bridge since the halcyon days of the mid-90s. Some have regarded it as a hysterical outpouring of human emotion which has nothing whatsoever to do with the Holy Spirit, while others have pointed to the fruit in terms of social outreach programmes, intercession, healing and empowering. Some have tried to prove from Scripture that these kinds of manifestations are only to be expected, while others have used the same Scriptures to demonstrate that the whole thing was a Satanic plot to corrupt the church. Twenty years on all I can say is that this period of my life was the most fun, the most exciting and the most fulfilling. I can point to changed lives and changed churches, and I cannot but believe that God was doing something especially powerful during those days. The fruit in my life from this period remains valuable.

For the rest of the story see God’s Upgrades … My Adventures published by Authentic.