Chill the champagne for when you’ve read this: we’ve done the OT! Sadly it’s downhill from here on as we tackle what my OT tutor at college used to call ‘The Appendix’. But first, what about Malachi? His name means ‘My messenger’ and it may be that 3:1, rather than being a prediction of John the Baptist, he sees himself in this role. He provides the final warning before the God whom the people say they want to meet actually turns up, but with judgement. 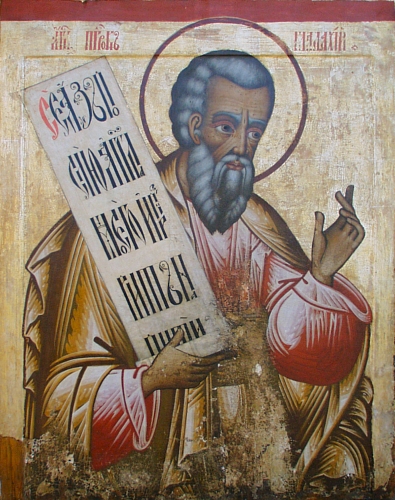 The OT ends with a whimper, not a bang, as Malachi, who appears to have ministered after Haggai and Zechariah, paints a picture of a nation in the doldrums. The building work may have been completed, but the hearts of the people and their leaders alike are far from God. In a series of condemning paragraphs the prophet challenges the people because they are casting doubt on God’s love for them, offering blemished sacrifices, getting divorced, dealing unjustly, holding back tithes, and speaking arrogantly about God. The priests particularly are condemned for their slipshod ministry and lack of reverence. It is a hugely disappointing picture after the high hopes for renewal expressed by earlier prophets. Has the nation really come to this?

The purple passage, much loved by Diocesan Stewardship Advisors, is the bit about tithing in chapter 3, but this particular failing has to be set in the bigger context of a nation whose hearts are far from God and whose behaviour shows it clearly. It isn’t surprising that money, which Jesus clearly warned us about as a rival god, is just one symptom of a deeply sick society, as it often is of a deeply sick church.

And yet this book is not one of blanket condemnation with no hope: there are clear pointers to courses of action which will bring health and renewal. Fear God’s name (1:14), teach knowledge (2:7), stay faithful in marriage (2:16), tithe properly: all these are ways out of this mess the nation is in. Common sense really: God has identified exactly what you are doing wrong, so just stop it!

But human effort alone is not going to save things. The other famous passage is 3:1-4, seen as having been fulfilled in John the Baptist and Jesus. After a herald proclaiming his coming, the Messiah will come to purify the nation’s leaders in a process described in terms of metal refining, where impurities are burnt up leaving only the precious metal. Those who are faithful to God (3:16ff) will be loved and treasured by him, while those who are not are ripe for a good burning. A key, and very challenging verse, is 3:18: ‘You will see again the distinction between the righteous and the wicked, between those who serve God and those who do not.’ The OT ends with a reminder that there is a black and white distinction between God’s people and those who are not, a theme which continues through the teaching of Jesus but with which we are most uncomfortable nowadays. Our job meanwhile, like that of all the prophets, is to call people to a knowledge and a recognition of who God is, what he demands of us, and how we may be purified to live and worship in holiness.

I don’t know about you, but I’m a bit confused about Advent themes. In the good old days it was all about death, judgement, heaven and hell, but there’s also that stuff about prophets, patriarchs and the rest. The ASB helpfully gave us weekly themes, and Bible Sunday used to be around here somewhere too, but then in reaction to the ASB themes Common Worship is a bit shy and prefers us to see what we hear as we meditate on the readings, rather than telling us what we’ve got to find in them. Confused …? However, from the gospel for today we’re apparently supposed to be thinking about John the Baptist, so what does Isaiah have to say about that?

The first thing which strikes one is the similarity of this passage to the ‘Servant Songs’ from the middle chapters of the book. The Spirit of God had anointed someone or other (discuss!) to bring redemption to Israel through sacrificial suffering. Indeed the nation had suffered in exile, but now they are back in their homeland and have the task of rebuilding not just the physical city but also the national life. So now a new ‘servant’ is being called and anointed, like the previous one unidentified, but probably in this case the prophet himself. His message is one of hope, new life, restoration and redemption, and he speaks to a people whom one might imagine literally standing in the ruins of the city, among the broken and scattered stones of the once great buildings, hearing his good news of a new start. It’s not difficult to see how the ministry of John was foreshadowed in this passage.

But what is interesting is the hints we get here about the foundations of this renewed community. In v 8 we get a glimpse of God’s values, the things which are important to him: he loves justice, and he hates robbery and wrongdoing. And then again in v 11 God promises to make righteousness and praise spring up. This, I think, helps us to deal with the question prompted by all the lovely stuff in this chapter ‘Well where is it then?’ The ongoing history of Israel after the return from exile was anything but as rosy as this text paints it. We’re still waiting today for the glorious future of Israel as they fight within their own land and as a mosque occupies pride of place in Jerusalem. Righteousness and praise, robbery and wrongdoing. We know clearly what God likes and doesn’t like, but, as with the people in the time of John the Baptist, we have a choice as to how we live. Choose the right things and we choose life, hope and a future. Choose the other way, and there is no certainly of God’s best will becoming reality. God never forces his blessings on us, and the story of the Bible as a whole is the story of God’s plans for blessing and prosperity being thwarted again and again by twisted human rebellion. There is hope, there is a future, but as a human race we need to hear again, more urgently than ever, John’s cry to repent.